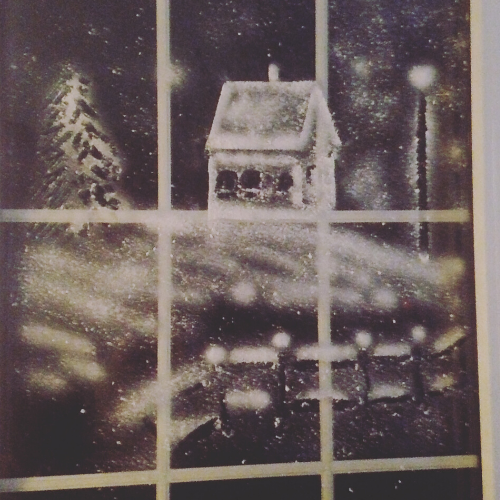 I am not the best artist in the world, and I know that. But I am creative. Always have been, which is why I try out new things. Snow spray art is just ones of those ‘new’ things. Why new? Because I saw it done on the telly for the first time and I simply had to give it a go!

Snow spray is the stuff in a can that we had every Christmas as a child. We would spray this fake dry white foam on pine cones and windows. The smell of it just reminds me of Christmas and simply making a mess.

I have only ever seen objects being dusted in it or sprayed on the windows to give an illusion that snow is falling and has settled on the window pane.

But to take it to another level in regards to snow spray art? This just amazed me. 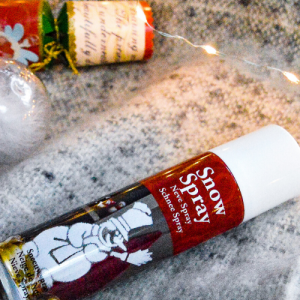 Where did I see ‘Snow Spray Art?’

As I am writing this, it is December. So obviously everything is Christmassy – including what is on the television. In the run up to the Big Day, I enjoy watching cookery shows and anything crafty. So when Kirstie Allsop’s ‘Kirstie’s Handmade Christmas’ comes on, I’m there.

I have one of Kirstie Allsop’s craft books and I do like to give things a try. But when I saw a chap called Tom Baker – ‘snow artist’ (not Dr Who!) on Kirstie’s show, I thought ‘Yeah, I can do that’..

It is as easy as it looks??

If I get real here (and if you check out this guy’s work) I’ll never be as good as him. His winter wonderland scenes are spectacular. He creates towns with trees, churches, people, cars and even a flying Santa. He does all sorts. On shop windows, on estate agents, all over! I even checked out a YouTube video where he did a window in around two hours. Amazing isn’t the word.

After a bit of thought (and a bit of Googling to gain inspiration) I decided to go ahead with this. It was hard. In fact, I probably had three or four attempts before I was okay with what I created.

So when I first tried, I was determined to make it all my own work. By that I mean free hand and not by using stencils. On the show he gave Kirstie a bridge template, then she used freehand around it. I liked that idea.

However, in December, finding a cool stencil (that isn’t a bit of holly or a star) is hard to find. But I have to admit, after my first failed attempt, I was desperately searching for one online.

I then gave up and did some pathetic looking trees and a rubbish snowman. They were probably okay, but not the look I was after.

He had even showed Kirstie how to make the trees – using a brush to get the detail to ‘push’ the snow. But I couldn’t quite get the hang of it. 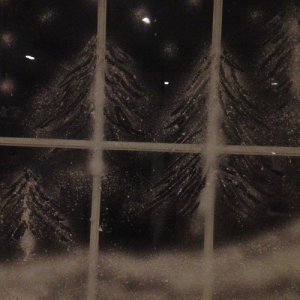 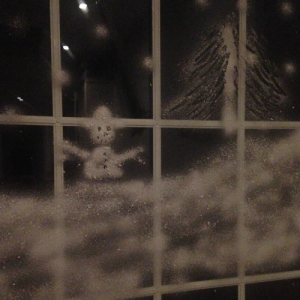 Update: I have discovered Tom Baker’s website which is called Snow Windows. (only because the man himself has spotted my window art on Instagram and gave me a very nice compliment. Very exciting!) Stencils and stickers are actually sold there.

I walked away from my window of shame. I did the nursery run and Eva came home and enjoyed sticking her fingers in the fresh snow spray!

But that evening I just thought, I can do this! For some reason I just cleaned off the snow spray art I had previously created and started again. With a bit of help from Tom Baker’s art work. I had to have something to go on, so I looked at a couple of his images. I knew if I tried to recreate them they’d look very different, but I needed something visual to guide me.

I did an image of a farm house first of all. I just thought that I needed to use some tools. So I used a bit of straight card to help me with the lines. Then I used the snow spray lightly in some areas and thicker in others for the right effect. Then using the small paint brush to make lines, windows and roof tiles I started to kind of get the hang of it.

My house was done! So I tried a street light. His work gives the illusion of light and dark which is a weird thing to achieve. But by spraying lightly around the ‘light’ and leaving a ring around it, you can give that effect.

I then tried the tree again. My first tries were terrible, but this time I just focused and etched the snow by pushing the fresh snow spray upwards using the brush. It worked! Not as good as Tom’s of course, but not bad for my humble kitchen.

Then I tried a fence! I was happy with my results. 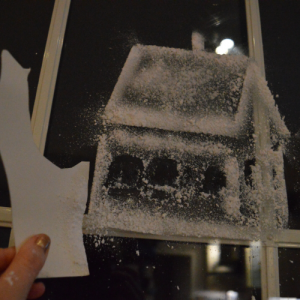 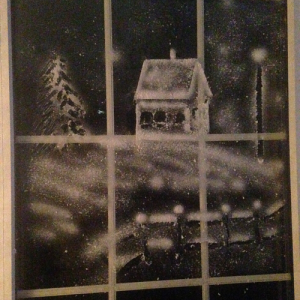 I was pretty happy with my window, but my Georgian doors are quite large. So is less less? I really couldn’t resist having another go.

Instead of doing something similar, I thought I’d get more technical and try the bridge. Freehand. I did half the bridge which was okay. Then I tried another house and street light, but I messed up my snow ground. That got wiped off.

Was I going to give up? No. I did one more snow scene. This time a church. I used the same tools as before – my piece of cardboard and my art brush.

It’s okay but practice will make it look better. 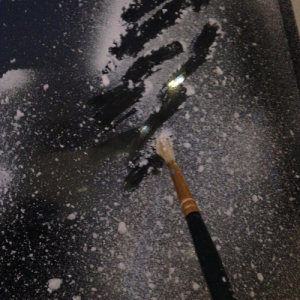 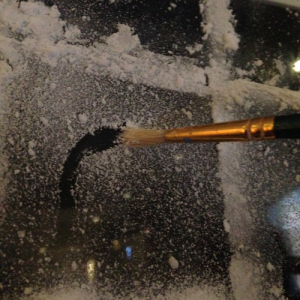 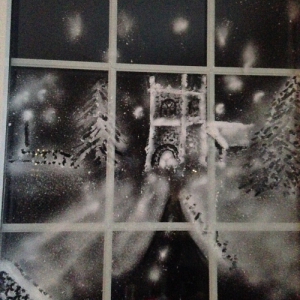 For a first timer (or about tenth by the time I’d cleaned off my mistakes and started again!), I learned a few things.

1.Do this when it’s dark. In fact they said that on the telly. But did I listen first time? No I didn’t! I was too impatient. So my first go was rubbish.

2.Don’t do this when small children are around. Unless they are very well behaved, or you give them a bit of window to have a go on themselves. If you want to create a masterpiece, kids will only try and take over (or draw in it with their fingers, like my daughter did)

3.Invest in a good window cleaner! When it’s fresh, it’s still wet so easy to come off. But once it’s dry it’s hard work to remove!

4.It’s messy! Don’t have things on the floor that you don’t want covered in foam. I have a habit of leaving shoes at the back door, so they might be a bit snowy inside..

5.Be brave! I was too nervous to begin with. Then I made the snow too thick and I didn’t achieve the desired effect.

6.Don’t be afraid to keep trying. I guess patience is everything when it comes to creativity. 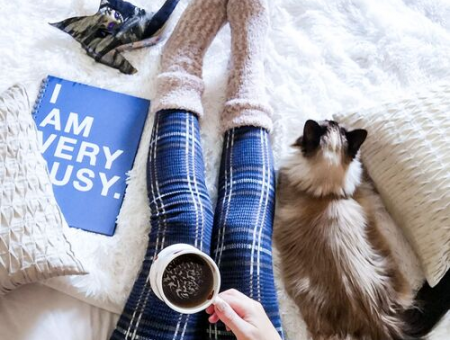 How to effectively work from home 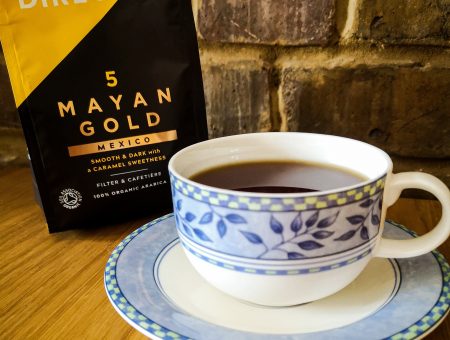 Cloth Sanitary Pads: Do I Swap to Reusable?